Saudi-Qatari hegemony struggle over the spoils of the ‘Arab Spring’

About the rivarly between Saudi Arabia and Qatar in the struggle for hegemony over the context shaped by the ‘Arab Spring’. This never got published, as it was due to appear on The Majalla, but the Saudi magazine is reluctant to publish features it considers detrimental to Saudi interests. It was written in May 2012

Qatar has been undoubtedly the leading actor of the Arab spring on the international scene. Doha finalized its bid for power started in 1996, when Al-Jazeera was founded and Shaykh Hamad Bin Khalifa al-Thani overthrew his father in a silent coup. The tiny emirate provided a powerful media platform for Tunisian, Egyptian, Libyan and Syrian revolutionaries and further consolidated its financial support for the different branches of the dissident Muslim Brotherhood (MB), banking on their electoral success. On the other hand, Qatar remained fully aware that political turmoil was in its interests as long as it wasn’t a threat to Gulf monarchies, therefore it agreed on the deployment of GCC troops in Bahrain to help the Sunni ruler resisting a Shi’a uprising.

While cultivating its dreams of expansion, the emirate has always been living under the Saudi shadow. Even Al-Jazeera became wary of annoying Riyadh and was allowed to open its offices in the kingdom last January, only after allegedly toning down the coverage in the last years. However, the future of Qatar’s political leverage in the region is highly dependent on its will to challenge Saudi Arabia by maintaining good ties with the MB and the Iranian camp. At the same time, Doha needs to balance carefully interferences in post-revolutionary contexts to avoid cleavages between its Islamist allies and their rivals. 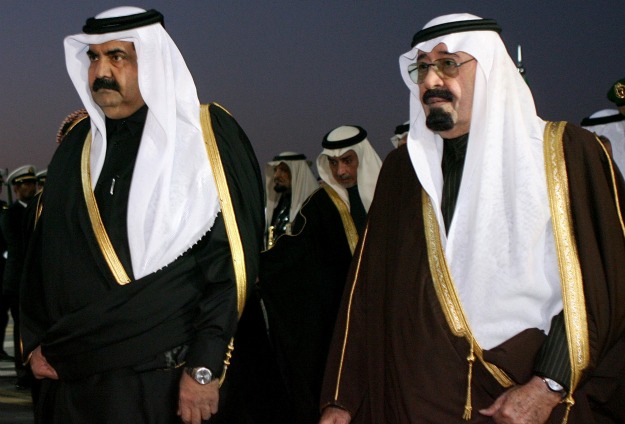 For what concerns the low profile competition with Saudi Arabia, Egypt is a particularly crucial context. Although tracking down the foreign funds received by both the MB and the Salafi Al-Nour Party is particularly difficult, due to their recent history as legal political forces, the Qataris- and Turkey’s ruling AKP- have been focusing on the Brotherhood, whereas the Saudis preferred sponsoring the Salafi newcomers. Former MB leader Sayyid ‘Abdul-Sattar al-Malija claims $95 million have been received by the Brotherhood from Qatar for the parliamentary elections. Saudi Prince Talal Bin ‘Abdul-Aziz al-Sa’ud denied Government funds have been channeled to Al-Nour, but he didn’t exclude financial support coming from Saudi Salafis. In the end, Wahhabism, the Saudi branch of Salafism, is a homebred version of apolitical Islam the Sa’ud family has always been keen on exporting, whereas the originally militant Islamism promoted by the Egyptian MB and its ties with Iran have often been perceived as a threat. Riyadh would have clearly preferred Mubarak to stay and relations with Egypt are already tense, after demonstrators assaulted the Saudi embassy in Cairo, protesting against the arrest of an Egyptian lawyer in the kingdom.

Bearing in mind the dependence of the Egyptian military from the US, the MB is not left without any alternative to Saudi Arabia, as Iran is just waiting around the corner: the former head of Tehran’s political bureau in Cairo, Sayyed Hadi-Khosrow Shahi, called on the Iranian authorities to be patient, because once the military junta will be handing over its powers- if it ever will- the MB will be the first party interested in establishing new relations with Tehran. After all, Iran has been waiting for this moment for the last thirty years.

In this context, Qatar is in a really favorable position, taking into account its ties with Iran and the influence held over the most prominent expatriate of the Egyptian MB, Shaykh Yusuf al-Qaradawi. The Sunni cleric is significantly indebted to the emirate, where he was granted Qatari citizenship, after fleeing from Nasserist Egypt in the ‘60s. Qaradawi is known for his political opportunism, the leftist Lebanese-American professor As’ad Abu Khalil said of him that he “would subtract a daily prayer if ordered to do so by the Emir who sponsors him”. The Brotherhood’s spiritual guide has been functional to Qatari interests for a long time, being also one of the pillars of Al-Jazeera’s popularity, but to which extent is the emirate willing to jeopardize its relations with other Gulf countries, by following the Brotherhood’s emboldened political status? A significant episode was the quarrel between Qaradawi and the head of Dubai’s police, Dahi Khalfan: the latter was attacked virulently by the Egyptian Brotherhood’s spokesperson, Mahmud Ghozlan, who threatened to mobilize the Muslim world against the Emirates, after Khalfan dared attacking Qaradawi for his criticism on the UAE’s alleged deportation of several Syrian protesters. What if this is only the beginning and the MB will feel entitled again to raise its voice against Gulf countries? The Emirates and Saudi Arabia are not likely to stand on the side of the Egyptians and the Qataris might be asked to take distances from Qaradawi, but what if they refuse and choose to defy their neighbors? Doha’s leadership needs to ponder over its choices, but it clearly doesn’t lack ambitions.

Tunisia is another political battlefield, where the Qataris are more in the position to pull the strings than the Saudis, taking in consideration their ties with both the ruling Al-Nahda Movement – the closest to the Brotherhood, ideologically speaking – and its supporters in Tehran. In Cairo and Tunis, the Brotherhood and al-Nahda have been struggling for decades against Western-sponsored autocrats, hence they pursued good relations with the Iranian camp. In April, the Central Bank of Tunisia received a half a billion dollars loan from Doha.

Qatar and Saudi Arabia are more likely to act hand in hand in Syria, where the Syrian MB is opposed to a regime closely allied to the Iranians, thus earning the Saudi support under any circumstances. However, the main political body of the Syrian Brotherhood, the Syrian National Council (SNC), is rapidly losing popularity among revolutionaries for its little achievements, whereas Salafi trends are gaining wider support in an increasingly sectarian confrontation with Alawis. If Asad will be overthrown, figures like the Saudi-based Syrian Salafi preacher ‘Adnan al-‘Ar’ur and his followers could rely on Riyadh’s support to enter politics. This would open room for confrontation with Doha’s favorites in the SNC.

Besides the possibility of triggering Saudi concerns, Qatar is facing an equally serious risk of splitting post-revolutionary contexts by favoring certain parties over the others. In an interview I had with Samir Nashar, one of the members of the SNC executive committee, he motivated his rejection of the extension of Burhan Ghalioun’s presidential mandate, by claiming it was dictated by foreign pressures possibly coming from Qatar. Already in November, the former Libyan Prime Minister Mohammad Jibril accused Doha of promoting the rise of some rebel factions. In Algeria, according to secular parties, Islamists received Qatari financial support for their recent electoral campaign. The Egyptian presidential candidate and former member of the Brotherhood, ‘Abd al-Mun’im Abu al-Futuh, has been targeted with similar allegations. In Yemen, the independent MP Ahmad Sayf Hashid blamed the local MB branch, the Reform (Islah) Party, of being more despotic than the ousted President ‘Ali ‘Abdallah Saleh and he accused the bloc of using Qatari funds to win over its foes. The Qatari selective support has become an increasingly common reason for attacking political rivals and it could be enough to question electoral results and stir up violence.

“Qatar is reacting to the fact that the traditional heavy-weights in the Middle East – namely Egypt and Saudi Arabia – are not playing their customary roles”, explained the veteran correspondent of the New York Times, Anthony Shadid, “there is a political void in the region that both Qatar and Turkey to some extent have stepped into”. The continuation of Qatar’s rise to power is largely dependent on its skills to carefully erode Saudi regional hegemony and weigh out interferences in the countries of the Arab awakening.