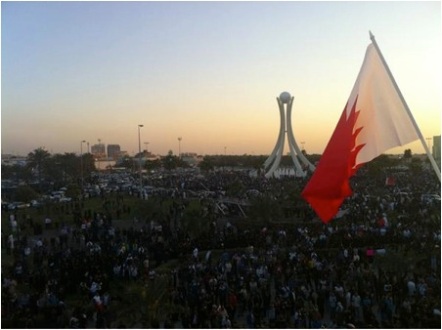 A. H. is a Bahraini engineer and activist in the 2011 Bahrain Revolution, victim of detention and torture of Ibn al Khalifa’s regime. Today he is a political refugee in Australia.

I think the conservation I had last 30th April with A. in Auburn – western suburb of Sydney – is worth being published here. The information I have collected has been jotted down with no selection process: this might not fulfill the reader’s expectations in terms of empirical details, and the expressed ideas have not intentionally been “rectified” in the name of political correctness. Nonetheless, I believe A.’s words have raised interesting points that would be worth further understanding, particularly on the way revolutions’ protagonists feel unrepresented from outside and on the contradictions that emerge between political opinion and private life.

The name of my interlocutor cannot be revealed to protect his identity, as he told me that “the number of Bahraini refugees in Australia is too small to pass unsuspected”. Moreover, a part of his family is still working for the government and living in al Manama. On this purpose, I would really like to highlight that the co-existence – not necessarily to be interpreted in terms of “cooperation” – of the lives of the revolutionaries and their regime, is often considered by “revolutions’ spectators” as a deplorable sign of incoherence, applying ethical labels to the phenomenon. Yet, the chances to get a good job and build life opportunities in a reality of long date dictatorship are totally linked to the governments, as it also happens in the case of many Syrian activists I personally know. Things cannot be seen from a universal perspective when people grew up in social contexts where, in order to get livelihoods, are somehow forced to pay lip service to the regime they are fighting. These people are even more honorable, as, even though they have no choice but behaving in a compromising way for their survival, they are still contesting their power structures with all their strength instead of adulating them – as they could do if they did not care about social and political changes.

A.: I got detained and tortured twice from the regime during n this revolution. After that, the regime released me but kept persecuting me. So, when I was in Dubai for work, my family told me not to go back home, since I’d have jeopardised my life. From Dubai I therefore went to Thailand, and then I asked for political asylum in Australia. I finally found a job few weeks ago.

A.: The outset was like all the other revolutions: there is not a leader guiding the protests or promoting a singular ideology. In the same way as it started in Syria, it is a reaction to years of de facto dictatorship, tortures and corruption in the government. Every 5 to 10 we actually have protests in Bahrain. This time it has been very big as it has happened in the wake of the Tunisian and the Egyptian revolutions. Bahrain, insurrecting on February 14 2011, has been the fourth after Tunisia Egypt and Yemen, but it occurred before the revolts in Syria. We were 500,000 out of 700,000 people in the streets at that time.

A.: No. I don’t think there is a difference. We certainly have the element of public crying in Shi’ism, that you can witness in the streets in al Manama when demonstrators protest. But I don’t personally think there is a real difference apart from that: the act of protesting makes all of us even more similar in our struggle for justice and equality in the Arab world. However, of course, there definitely is general empathisation with Shi’a. But this is another matter, it has nothing to do with politics. This sort of cosmopolitanism you’re mentioning has to do with me as a Bahraini Shiite, just in the sense that I prefer gathering with my family in Iran or Iraq, rather than going to Egypt or Tunisia. Ok, maybe in this sense “Shi’a cosmopolitanism” is real, but the connection with politics is far more complex. All revolutions have been started by marginalised and neglected people that were fed up with their current political system, either Shi’a or Sunni. But the media sold different truths and focused instead on confessionalism.

A.: The civil society in Bahrain has always been there. It was just silenced by the regime and not organised at all, as we didn’t have the chance to organise ourselves. We used to gather in houses and discuss about social changes, but the mass phenomenon of the revolution involved much more people. It turned into something that had never existed before. At a political official level instead, we presently have seven different parties.

A.: It can be a simple thing like denying a scholarship at the university if you have a Shiite surname and you are not politically affiliated to the central state. They are going to prefer a Sunni. And this happens not because Sunnis want to divide people: the regime rather wants to generate social frictions between the two parts. It is the same strategy as that used by Bashar al Asad. I mean, in Bahrain there is more Shi’a than Sunna protesting against the regime, and this is due to the fact that we outnumber Sunna by far. This significative detail is under-mentioned in the media. You usually look for answers: that’s the problem of the West, and the easiest answer you can give to your questions is to confessionalise the events and their root causes.

A.: No one wants an Islamic state, that’s for sure. We don’t have anything like Jabhat al Nusra in the Syrian war. In legal terms… I will be honest with you… I don’t know that much about that and everything is pretty vague. Our problem lies in not having a real written law: our law is the will of the king. Citizenship is formally considered an equal principle for everyone, but, pragmatically speaking, it does not work that way. We face social hierarchies of citizenship that the regime has confessionalised to push us to fight each other.

A.: They are not really giving an idea of it as much as they should: they show the atrocities in Bahrain and then they say that all that is happening in Syria. Especially al Arabiya is the voice of Ibn al Khalifa: the media cannot therefore raise awareness of what is really happening in Bahrain. The problem is that activists, throughout the world, just advocate for what they hear about. So, this creates a vicious cycle. As a result, we don’t have any visibility.

A.: Absolutely. The international community has totally overlooked us. I hate Asad with all myself and he was also feeding confessional frictions among his people, but, yet, I think the media have not ignored the events in Syria if compared to Bahrain.

A.: The things started as a popular uprising against a tyrant, but now the confessional elements are playing quite a big role in Syria. In Bahrain it’s still a popular thing instead, with no weapons, and also many Sunnis are taking part in it. The social media don’t talk of them though, as they want to show that it’s just a Shiite thing. Syria has now become a sort of “Vietnam of the Arabs”: it’s the war of everyone that is being fought on their soil. With Syrians, Bahrainis tragically share the interference from the Arab Emirates: the latter also entered Bahrain in March 2012 to support the king, and they still contribute to the social repression we are undergoing. We are not facing yet a confessionalisation of our revolt, unlike Syria. Now the salafists in Syria hold the country’s future as a hostage for warranting their future power. Don’t’ get me wrong, but I must say that, at this point, I hope Asad won’t step down, unlike what I was hoping for at the beginning of the Syrian revolution.

A:. No, I would never support al Khalifa. If you put it this way, you are right. But in Bahrain such confessional extremism could not take ground.